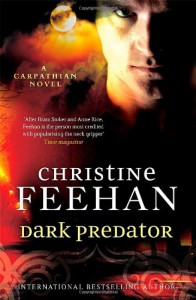 In hindsight this ‘new’ installment in the Dark/Carpathian series by Christine Feehan reminds me of the bodice-rippers of the eighties and the beginning of the nineties. You know, the he-heates-her-but-loves-her-yet-he-hates-her-for-making-him-fell-while-she-loves-him-no-matter-what-he-says-or-does-to-her.

And like those bodice-rippers, it was ‘fun’ at the beginning, but quickly went old and annoying. Because the guy was a bastard. There’s no way around it. He was a bastard. Yes, he had cause to be a bastard, we were told the story of the ‘anomaly’ he suffered, the same his father had suffered that made him go all snarly on his own kids...But still, he was a mean killing machine and a super SOB when he wanted to be. And he pretty much wanted to be one constantly. Those glimpses of the good, cuddly, marshmallow-y Zacarias weren’t enough to redeem him. Men!

While reading this book, I had repetitive urges to throw it against the wall. And all because of the hero, that for me, doesn’t really deserve the name. And I repeatedly said that if he was real, he was mine, he was standing in front of me, I’d hit him with a shovel. A lot. Maybe someone should invent the video game of Whack-Zacarias. Involving Zacarias and a shovel. I’d play. I’d probably set a record.

And because the ‘hero’ was such a caveman (which is mostly endearing and awwww-sounds-inspiring in CH books—in this one not at all), idiot, cretin, bastard and SOB, the heroine’s behavior (mostly her actions and reactions to him, her feelings toward him, her obstinate forgiveness) made me dislike even her. Though not so much as the ‘hero’. How can someone be so utterly blind, trusting, stupid beyond measure to actually forgive such a guy. Sorry, but the excuse ‘she loved him’ simply doesn’t cut it. Even the last forgiving act she did in the book—what the hell was that?! He’s been ‘savage’ in turning her, she mentally rejected him throughout the process, yet, because he’s injured (poor baby) all is forgotten and forgiven. At least whack him with a shovel a couple of times! Women!

Again, in hindsight, this would probably work a lot better as a novella, if you ask me. Less Zacarias’ SOB behavior, less back and forth between fear and attraction on Marguarita’s part, more concise story (because there wasn’t much plot there), and the final battle with much more weight (as it was it was more of a get-it-over-with-so-the-book-will-end deal for me).

I like Christine Feehan’s writing, Dark/Carpathian series especially, but this one just wasn’t my cup of tea, I guess. Too much...I don’t know, just too much. Also, I’m starting to chafe whenever a word in the Carpathian language appears in the text. At the beginning of the series, when there were none, it was better for me, now the ‘language’ just chops up my reading. But that’s probably just me.