Surrender to a Wicked Spy by Celeste Bradley 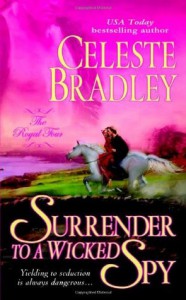 After ending up in the Thames, thanks to her meddling mother, Olivia is rescued by a Viking god a.k.a. Dane Calwell, Lord Greenleigh... Well, in the end she is the one doing the rescue.

Olivia, despite the fact she knows absolutely nothing about her husband, ends up falling head over heels in love. But it will take much more for her husband to follow her lead. Much, much more.

Dane Calwell, known to his fellow spies as The Lion, is quite content with his choice for a wife. Olivia is, according to her mother, the epitome of sophistication, meek, poised, a perfect hostess... everything a man of Dane's position dreams of. Unfortunately, he's in for quite a surprise when he discovers Olivia's mother has vastly exaggerated.

Now, the newlyweds have to get to surpass the initial obstacles of marriage between virtual strangers, get to really know each other, and stay alive when a blood-thirsty enemy conspires against them... And the very Crown.

Whomever wrote the blurb should be sacked on the spot. They didn't even see the cover of this book, least of all read it through.

Despite being the a sequel to To Wed A Scandalous Spy, this book pales in comparison. There is not much of a plot to be found, except for the main Chimera thread which began with the Liar's Club series.

I didn't like the two leads, Dane and Olivia, although if I had to choose, I'd choose her over him any day.

She was sweet and caring, though a little stupid at times. Sorry, but rushing to a courtesan's door for help of preparing a ball, without even knowing who you're meeting, just doesn't strike me as incredibly bright. Yes, I know her mother embellished her to Dane, but couldn't she just tell him the truth? They were married, he wouldn't divorce her just because she had no idea how to host a ball.

Dane was just an ass. A huge (all over), overbearing, egotistical, overly proud, blong, Viking-ish ass. And though the author offers an apology for his behavior - his father sending a bullet into his brain over a woman - it just didn't ring true for me. He was hard and he was harsh, and his actions spoke strongly against him. So much in fact, I was aghast as to how Olivia could forgive him in the end. I know redemption is an integral part of a HR template, but some of the things he said to her were worth beyond contempt.

The romance between them didn't click for me. It just seemed empty and cold. They seemed more a going-through-the-motions couple than a man and a woman gradually developing tender feelings for each other. Maybe it was also due to the fact that Olivia falls for him almost instantly, while his feeling (or their development) are never revealed fully - he was more in lust than in love with her.

There were plenty of eye-roll inducing parts. The most memorable being Dane's "anatomical problem". I was fine with it for a while, it explained some of his reservations of giving in fully, but after a while the constant reminding of his impediment grew tiresome and boring.


Ms. Bradley failed to exploit the little things she created. The refreshing twist of having the leading couple married from the beginning provided ample opportunities for excellent characterization, yet she left the character development drop in lieu of bedroom scenes.

Also, her trademark humor seemed to disappear entirely, except in the scenes with George IV. It's evident the author uses him as a comedic interlude, which is also a pity, since he's such a rich, layered character.

The only thing I really appreciated, was the return of the Reardon's, Nate and Willa from the previous book. Luckily, Willa retained her characteristics and had no qualms giving Dane a hefty piece of her mind on how a wife should be treated. I wouldn't have minded - and it wouldn't be a grand surprise - if she took a well-aimed knee into the region of his "anatomical problem".


As I said before, Surrender To A Wicked Spy had too much sex and too little story, and even what smidgen on plot that survived the bedroom scenes, seems flat, missing the usual Bradley spark.

Not extremely disappointing, but not a keeper either.