Eternity in Death by J.D. Robb 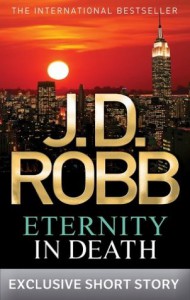 A fourth-generation rich, club-hopping socialite is found dead in her own bed with the only sign of trauma two puncture wounds in her neck. Cause of death: exsanguination.
The woman has recently hooked up with a mysterious man, no one has seen, no one knows... Except for the fact she called him her "Dark Prince".

Lieutenant Eve Dallas is a pragmatist; she doesn't believe in the occult or the paranormal. She knows Tiara Kent wasn't killed by a vampire; a human did her in, and Eve has her suspect. He might not be a monster of legend, but he is a monster; she recognizes it in him...Now she just needs enough-ha-nails to hammer into his coffin.


This story was short and quick, yet it still packed quite a punch. It had enough sprinkling of potential paranormal elements to keep the characters (and reader) guessing, even despite everyday human logic.

The killer was known almost from the start, so there wasn't much investigation or procedural going on, but the pacing held strong, the plot was tight and intense, the story engrossing and slightly creepy.