Force of Attraction by D.D. Ayres 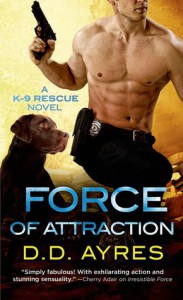 Two years ago their short marriage imploded due to his undercover work, now they have to work undercover together to catch a drug smuggling ring. Turns out, playing pretend boyfriend and girlfriend, skirting around their issues, and trying to keep their hands off each other is the easy task. The tough one is trying to keep one step ahead of a killer intent on destroying him by targeting everything he holds dear...


Now we're talking. I was thinking of dropping the series thanks to the first two not-so-good installments, but turns out perseverance pays off. Big time.

This book was everything the previous two weren't. And it had everything the previous two didn't. The main characters were sympathetic, realistic, and relatable (if we discount their expertise in their field of work). Yes, they had some major issues, both by themselves and with each other, but those were nothing we don't see in every day life...Their quickie marriage based on mutual lust and attraction imploded at the first hurdle, now, two years later they've both changed (hopefully for the best) and matured, they have different priorities, different goals in mind, and they've actually realized that lust and attraction (although still there) isn't enough, that an emotion of some kind has to be involved to make anything work. And that one particular emotion was involved before, but they were both too proud and stupid to heed it. Second-chance romances, when done well, provide great reads.
I liked both Scott and Cole, yes, they also annoyed me sometimes due to their issues and continuous misunderstandings and miscommunications; not telling each other important information on their encounters with the bad guy made them come off as a little thick and inexperienced despite their apparent long-period work in law enforcement. But I liked both of them, because they worked. Alone and with each other. They started off as complete opposites, but somehow, throughout the story, found the middle ground, the compromise it was needed to really make their relationship work.
And although the back-and-forth they were doing in their minds got a little old and stale toward the end, the characterization was good, and the progress from enemies to friends and lovers was organic, well-paced, and believable.
And I liked the analogy between Cole and Hugo, the way the pooch mellowed toward Scott as gradually as did his handler.

The suspense wasn't bad either. Although the main plot revolved around Scott and Cole's undercover work to bust up a drug-smuggling ring, the "main" suspense sub-plot was all about the past coming back to bite Scott in the ass in the form of a villain intent on destroying him by destroying everything and everyone Scott loved.
The descriptions of how an undercover operator might get sucked into the "fiction", how physically and psychically draining undercover work is, how not everybody makes it out alive or whole were vivid, gripping, and intense, and the juggling the man had to do to keep the current assignment floating while he tried to cover all his bases from an imminent attack from the ghost of the past, trying to keep one step ahead (and failing) was well-paced and intriguing.
Yes, it was an additional side-story, but it was so ingrained into the main storyline, a vital part of it, actually, since it provided more than one breakthrough in the relationship between Scott and Cole, that it didn't slow the story down, but kept adding to its momentum, keeping the pace steadily increasing toward the big finish.

Well-written, well-paced, with great characters, an intriguing plot, and good suspense. A page-turner.